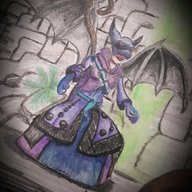 Black Thrush Agent
Platform
PC
Once upon a time, there was a beautiful princess named Prisma. She was named Prisma, because when she was born her eyes reflected the colors of a rainbow. Her mother fell ill around her 8th birthday and soon after passed away. Prisma's father, the king, went to the nearest Kingdom and started courting a lovely lady who resided there. On a visit to their palace the lovely lady became mysteriously very sick. She was put on bed rest, Prisma's Father stayed by the lady's side until her death. During this time the princess was taken care of by her handmaid, an attractive woman, who suggested to the king that he marry her as she had taken care of Prisma since she was a child. The king decided to marry her immediately especially because of her bond with his daughter. The princess grew, and as she grew she became more beautiful and radiant. This infuriated the Queen who dabbled in the dark arts, in her jealousy she created a potion that would turn the beautiful princess into a hideous monster. She slipped it in to the princess's morning tea, she sat with the princess, her stepdaughter, and watched the transformation take hold. However due to the princess's pure heart and beauty, she turned into a beautiful prismatic fairy. But upon seeing her form in a mirror so fragile and small she ran away Into the Woods. Prisma was terrified of how people would view her, because fairies were not accepted by humans and generally viewed as evil mischievous beings. She ran until she came across a gnome who was gathering Sunback Beetles.
He asked "why are you crying beautiful fairy?" She told the little gnome the story of how her mother died when she was young and how her evil stepmother was envious of her beauty and tried to poison her and created her form.
The gnome answered and said "do not fear I know a place where fairies live, it is called The Twilight Vale". He took her there and she has resided there ever since...

Now every year during the summer equinox Adventurers from all over Ethos, Sunkentooth, Greenhaven, Glittermore, Halcyon and other places. Come together to try and defeat the evil that has spread across The Vale and Prisma a herself .
There was no saying what would happen to Prisma after the potion was drank. The young princess was corrupted by the power of the potion. Wanting to be the most beautiful and the most powerful fae in The Vale. And every year young heroes come to the aid of the gnomes and people who dwelled there. To rid the land of the terrible corruption of Prisma and the other Fae Leaders.