Jack Of All Trades
Platform
iOS, PC
After we establish an acceptable balance for HP and Dmg, it is necessary to aim for more gameplay elements to maintain interest.

I am hoping that Raids will become more than just an exercise of adjusting the slope of HP & Dmg vs Players. Run to locations, a-b-c, press buttons until boss dies, then repeat for the next %increase on Otter’s HP & Dmg graphs.

Shouldn’t raids have a more game oriented vision of creativity to add fun? New mechanics are a tough ask given Lag on VH servers so what do we have left?

Relics may provide some variety to solving a raid and overcoming the challenges presented during their instances. Relic feats are currently underwhelming and just colorful animations to pacify.

Thoughts on making our vision of Raid less vanilla?

Jack Of All Trades
Platform
iOS, PC
Despite the planned removal of tiered progression (replaced with bronze, silver, difficulty etc), repeating the same content with higher enemy HP and Dmg will become boring. That said, repetition can be gratifying if there are elements of fun during gameplay, or if players can leave feeling accomplished by executing pre-meditated strategies and tailored character builds. Aside: An achievements tab for Raid, similar to the gathering, zing kills, zogs etc. would be great, but not the intent of this post.

Here’s an idea which tries to use what Devs have already implemented:
Consider Dungeoneering like a Talent Tree similar to how each class has its own unique active and passive ultimates. As players progress, they will be able to unlock the Relics at various rarities. This reduces the frustration of trash Relics currently given as RNG rewards. Players would be able to pick and choose their relic builds and power them up through Raid repetition. Dungeoneering XP milestones could be used to unlock Relics, ideally with a branched design to enable a variety of playstyles.

Instead of being generic, Relic variants could be mapped to class specific (themed) power-ups. Relics should be significantly boosted to provide players a means to counter the continuous upscaling of enemy HP and Dmg in Raid. Generic relics are fine, but making everything class neutral is just lazy design and kills the roleplay of mmorpg. Improved Relic design enables the potential for a more interesting and active element of gaming using different tactics (thoughtful builds and button presses) for winning a battle.

Hunters could become Agile: Powers up the “Dodge” Relic, which significantly increases Dodge Chance (80%) to avoid the 1 shots at higher difficulty.

Holys could become more Sustainable: Powers up a “Guardian” Relic, which will make the next 3 friendly spells crit heal along with reduced dmg for x amt of time.

Shadows could stack DoTs: Powers up something like Motherly Embrace and allows dots to keep stacking (instead of resetting), with a boost in % chance of detonation.

Warriors can become Tougher and reflect more dmg: Powers up a version of Avatar to buff dmg resistances and reflection.

Neutral Relics: Similar to Zephyr to boost cooldown or Soaring will to boost mana regen would be useful.

Elder Killer: a Relic that acts like kryptonite on storyline Elders to enable players to fight their own battles without begging a level 95 (e.g., higher crits, reduced dmg taken). Elder fights are either anti-climatic or impossible without middle ground. If devs are looking to cross-over into the normal game with Relics, this would be a great area to do so. Aside: I heard the reasoning behind underpowered Relics was to avoid balance disruption in the normal game. If so, remove Relics from the normal game or keep them isolated to specific circumstances outside of Raid.

Some Relics should also apply to groups. If enemy HP and Dmg scales punishingly with more players, then lets give the group some equally powerful abilities. This creates potential for group strategy and makes Raid less the soloist grind. I’m omitting examples here because my post is already longer than I wanted – hopefully others will jump on this if they like the idea.

For most battles, we mash spell buttons as soon as their cooldown is over. Now is a good time to revisit a suggestion made about spell combos and fusions. Consider this: Relic feats can be used with a single button press, but if the same Relic is activated following a specific button sequence, a more powerful version of that feat can be cast. Gameplay like this is what provides gamers mini bouts of satisfaction. Please consider this for future Raid builds.

An HP & Dmg vs. #Players Raid design will grow stale. Raid balancing is ofc necessary, but without further gameplay elements, we risk creating another chore of repetition to grind rewards (no different from Event Zones).

I truly hope this won’t be swept aside as too complex for casuals and taking away from combat in the normal world now that Raid is instanced. Presumably, this allows us to try new things in Raid and others can continue with EZ and rebirths.

Thank you devs as always for attempting to implement our ideas and making a great game.
Reactions: Black Sunshine, Zaphyra, KatieElf Queen and 5 others 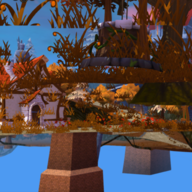 Jack Of All Trades
Characters
Xi, Plavuša
Platform
Android, PC
Until they sell it to a bigger game developer there will never be much diversity and big mechanics in the game. The current team is not on that level. Just look at the mashes of mobs, they are all created from a couple of mashes and the same goes for icons and pets and mounts, etc.

Big improvements will come to the game when they sell it to a big company with a proven track record.

Hunter
Royal Guardian
Platform
Steam
Not sure I agree with that. I think if they sold to a big company, we'd have much less personal contact with the Devs and we'd get PvP in a heartbeat. Would we/the game survive that? I'm not so sure.

Jack Of All Trades
Characters
Xi, Plavuša
Platform
Android, PC
PVP does not fit in this game and how it is made up. If they want to add PvP it would be totally new game as combat would need a total rework, not to mention stats, potions, damage numbers, and everything else that is already in the game. That would not even be the same game.
Reactions: Sigfrido

Xii said:
PVP does not fit in this game and how it is made up. If they want to add PvP it would be totally new game as combat would need a total rework, not to mention stats, potions, damage numbers, and everything else that is already in the game. That would not even be the same game.
Click to expand...

exactly. but do big companies care, I wonder. they just want to make money, and if that means drastically changing the game, I bet they will.

Warrior
Platform
iOS
Pvp would be fun! Catapult everyone out of contention!
Login/Signup
Scroll To Top
Top