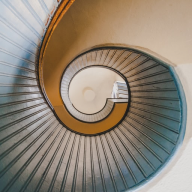 Firstly, throughout the leveling process there are certain stats that stick out as being more beneficial than others for a Marksman. Here is a guideline you can use when looking at gear you pick up. Note that this ignores crafted gear and the runes you can get from them. Anything not listed is basically worthless (some are good once you start crafting runes or reach end game, but during leveling they are worthless).


Secondly, Marksman are a bit more complex that one might think. They have access to exclusively damaging abilities; so one would think you just spam as much as possible. At endgame this is true to an extent; but in the leveling process, you really have to be careful what you use and when. Pay attention when you shoot stuff and take note of what works and what doesn't.

Lastly, when putting Concussive Shot on your bow, do not worry about its level. You are getting that ability for the area stun and nothing else. The damage is just a happy bonus. Trust me: that 7-second area stun is so powerful that even many hybrid nature builds use it for its effect. It's THAT strong!

Stick to the weapon you get from the main quest. It will have solid stats and the abilities you need to make it through the early game. Just make sure you are always looking for better armor, watching for drops with higher priority stats and bigger numbers. You generally want to open up with Slowing Shot to keep enemies away from you and use Splinter Shot whenever you can't do anything else and you have plenty of mana. Some early Clarity will go a long way towards reducing your mana potion usage.

Here is the first and probably biggest (with the exception of Gortrin Passage) obstacle facing Marksman. If you want a minimalistic build, then get Concussive Shot from the Elder Bow and replace Splinter Shot with it. You will do less damage, but you have just enough crowd control to kill the groups before they kill you. The strategy here is to hit one of the smaller enemies and try to kill it first. When the group surrounds you, use Concussive to buy some time. By the time they come out of the stun you should at least be able to kill 2-3 of the lesser enemies. Then the rest of the fight is the same as before: shoot them before they kill you. If, however, you are willing to spend a single socket, please do so! Having True Shot, Slowing Shot, Splinter Shot, and Concussive Shot will go a long way towards making this nearly impossible area somewhat bearable.

Get to level 31 and craft a rare or better bow ASAP. You can do this by going to The Slopes of Grogul or some other areas you haven't visited and do everything there: quests, bounties, kill mobs on the way. A level 31 crafted bow will slaughter the Red Cloister area, especially if you have both Splinter Shot and Concussive Shot.

This is identical to the early game, except now you will want to keep your bow as near your level as possible and start crafting them or having someone craft them for you. You will not need the extra abilities, but switching out Splinter Shot for a good Crippling Shot will help against single targets ... especially with the 5-point talent.

This is the second obstacle and it is again because of grouped enemies. At this point you should be ready to spend at least 1 socket on your weapon. In addition to the strategy used in the Red Cloister region, at least two options exist for you depending on how comfortable you are with the Marksman (abilities in parentheses are optional):
If addition to these strategies you should look into using Breakfasts and/or a Trinket rune like Conjured Regeneration to help with healing and general sustain.

You are home free! The game is a piece of cake at this point except for the mostly optional areas Maldwyn's Tomb and Gortrin Passage. Using the strategies above (in particular the advanced one) you can take on anything that is required for progress.
Reactions: V, Anthem, Karma and 1 other person

Squirrel
Royal Guardian
Characters
Math Fish (Marksman), Shama Fisha (Water), Accursed Angelfish (Shadow), Logical Loach (Fire)
Platform
PC, Steam
First, let's get the solo build out of the way. For solo play, you will only ever need 3-4 abilities plus Brutal Force.
The strategy is to use Brutal Force with Crippling Shot and Slowing Shot. After that just make sure you finish any bosses with Murder to keep the kill chain going. As for talents, all you need is the 40-point talent and 20 points into Barbed Heads. Everything else can be changed as you see fit. So, if you want to do solo content even through Blight, you can do it without even using a single socket! Now for the Support build:


Support Talent Build​
The essence of simplicity: Max out everything in the Marksman tree, then 20 points in Barbed Heads, and put the last 5 points wherever you feel like it. I don't even have the last 5 points! lol I will say this, though: For the full build you absolutely must have 120 points. Otherwise you will be missing a tool in your build. You can afford not to get the 5-point talent. And technically you don't NEED the 40-point talent for support, but you would be seriously gimping yourself if you did. So ... you could, in theory, have a variant of this build where you forego the 5-point talent and put 10 points into the Nature heal. That is a legitimate option you have, but it will require all 5 rebirths for the full build to work properly.

Your abilities are basically fixed. This is more a discussion of the roles of each ability.
Yes, you are reading this right! You have THIRTEEN abilities! Have fun spamming everything!

I would have to write a truly long essay on all the different strategies that could be implemented with this build. Follow the guidelines I put for each ability and develop your own strategies over time. This is a class and build that takes quite some time to get used to.

If you have any questions/comments/critiques, feel free to leave them below. I am more than willing to change this guide as needed. I will leave you with pics of my current (as of this post) build: 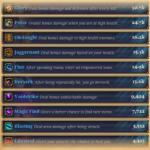 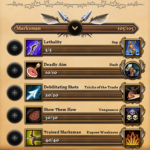 ​
Reactions: CaraLox, Kitty the Hunter, V and 1 other person

Merchant
Royal Guardian
Characters
Verrier
Platform
PC
What do you think about bandage? especially for leveling at lower level like Hall of Salvation-Cathedral?

Squirrel
Royal Guardian
Characters
Math Fish (Marksman), Shama Fisha (Water), Accursed Angelfish (Shadow), Logical Loach (Fire)
Platform
PC, Steam
For context, I didn't use Bandage until I started experimenting with raids. One attempt outside of raids was made to incorporate it into a build, and after not using it for a week I dropped it. This was later into the game, though.

At a lower level Bandage may be okay to use if you are going for a more defensive setup (with Armor, Magic Resist, Shielding, Blasting, Berserk, stuff like that). Even then, if I absolutely had to get some form of healing, I'd spend 10 talent points for the Nature heal or get Conjured Regeneration or healing potions or even the crafted trinket rune to prevent damage. Even without the Nature Mastery, the Nature heal is a better heal (especially if you have some Glory and Poise to boost its power), doesn't take a socket to gnog or waste an ability slot, and provides some mana sustain to balance its cost. If you are willing to use the extra socket, though, go for it. You don't need any further offense at that level - might as well have some extra healing. The only saving grace it has is being a solid heal OUTside of combat. The fact that Bandage does less healing in combat just makes it god-awful in general. Now ... IF you don't care so much about either damage or support with Marksman, you could switch out Wounding Shot with Bandage at end game and have a fair-to-middling Marksman build to use everywhere without worrying if a healer is around.
Login/Signup
Scroll To Top
Top