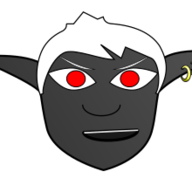 Ekimie said:
You should write a horror story
Click to expand...

-------
It was a cold and windy night. A dark shadow with red eyes and a bucket was sneaking around.
The layout of the residential area clearly confusing it.
The sound of paper flopping in the wind accompanied by muffled curses giving a indication that it was trying, and failing to find the right house.

As day was breaking the shadow approached its target.
Finding all the doors locked it once again cursed. The inhabitants were safe.
But as the first light revealed the elfin face of a drow, it also revealed a window not properly closed. He had found a way in!

Hurried by the approaching sunrise the drow quickly entered the house.
Silently he moved until he found a door marked with the name Ekimie.
Opening it he found the target of his search. A young girl sleeping soundly hugging a stuffed dragon.
Without making a sound he quickly move up to the bed. Then he emptied the bucked of ice-water on the bed, drenching the girl.
A wail rivalling that from a banshee woke the neighbourhood.
When her family ran into her room they found only the young girl wet and shivering in a corner, and a name written in eerie green flames on the wall. Illuthas. 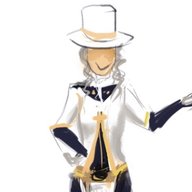